The PFI Lamplighters program gives people the opportunity to support prisoners in ways that help them become closer to God. The current monthly giving options for Lamplighters are $15 to support one prisoner and $165 to support an entire class. We hypothesized that adding a middle amount as a giving option would reduce giving friction, giving donors an additional option that might nestle in nicely between an amount that is too low or not impactful enough and an amount that is too high.

To test this hypothesis, we added a $60 monthly giving option to support four prisoners.

We believe that adding a third monthly giving option as an “in-between” amount for potential donors will achieve an increase in donations and revenue as it will reduce giving friction. 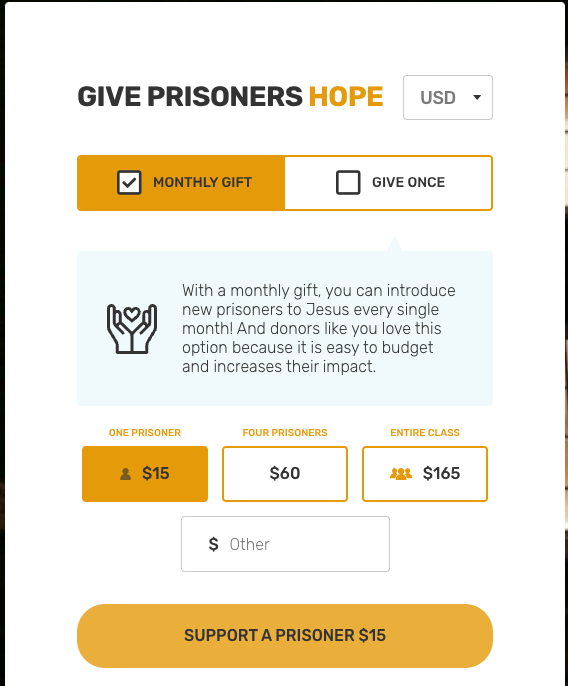 The impressive increase in revenue tells us that users responded very well to seeing a third giving option between $15 and $165. The $60 option reduced decision friction to where the donor did not have to think of an amount to settle in between the extremes of $15 and $165 – instead, the option was presented to them! Additionally, the $60 option will bring up our average monthly gift.

It’s worth noting that new visitors produced a 114% lift in revenue with a 98.3% level of confidence. This tells us that people that are less familiar with the Lamplighters program appreciate the $60 giving option, as they’re likely too new to the program to be willing to make a $165 monthly donation. But they are willing to commit $60/month to the program.