In an effort to increase recurring donor acquisition for a faith-based client during a Giving Tuesday campaign, we wanted to measure the effect of interrupting the donation process with a pop-up asking the donor to become a monthly supporter instead of making only a one-time gift.

This pop-up was set up as an A/B test that would only fire for 50% of donors who were in the process of completing a one-time gift under $100, reiterating the value of becoming a monthly donor both in terms of impact and exclusive benefits.

We tested this same hypothesis with the same client during last year’s Giving Tuesday campaign, and while we saw an encouraging lift in recurring giving, we were unable to validate our results—so we were eager to see how the same concept would perform in a similar setting during this year’s campaign.

We believe that interrupting the donation process with a pop-up for donors on Giving Tuesday will improve recurring gift conversion rates by increasing its visibility at the decision-making point and prominently communicating its value. 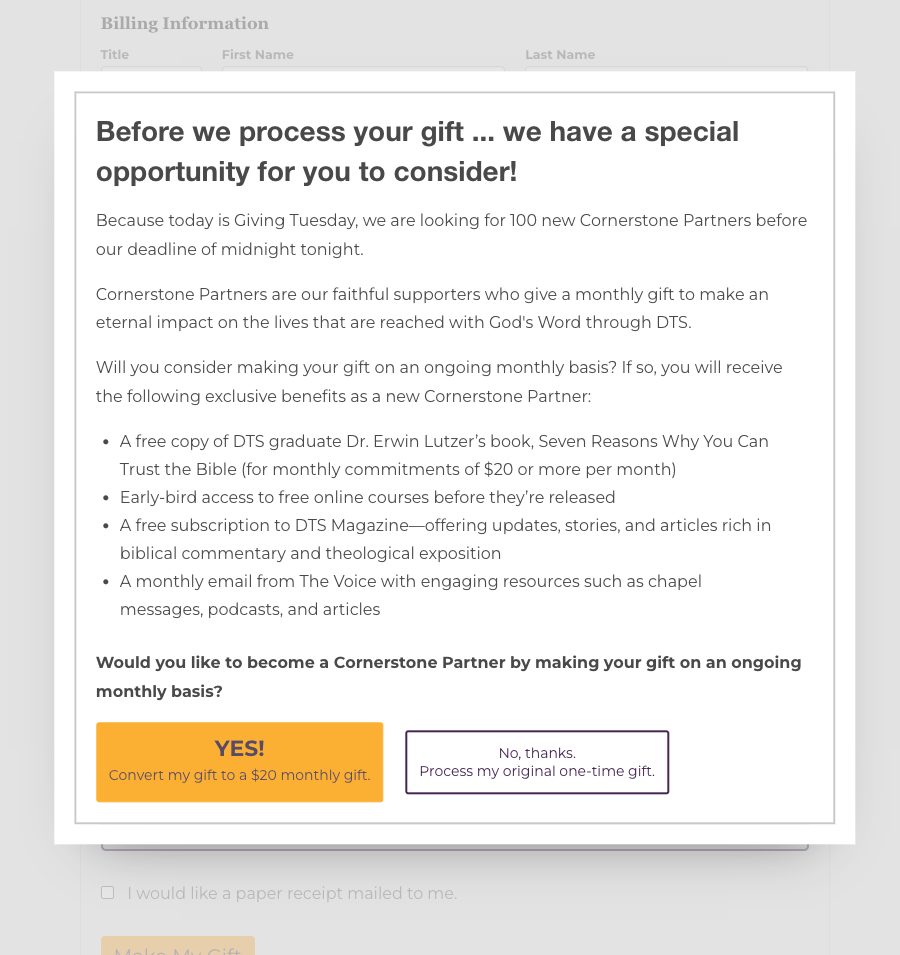 Due to an increase in the number of donors (sample size) over last year’s campaign, we were pleased to be able to pull a valid learning from this year’s experiment—with our treatment producing a statistically valid 137% increase in recurring gifts with a 98.4% level of confidence.

We believe that several motivating factors came into play in producing this result:

We also observed that the treatment produced a statistically valid increase of 210% in recurring giving among donors using mobile devices, important as we continue to see an increase in mobile giving over time.

These results are a positive indication that a similar treatment may work for other clients in the context of high-urgency campaigns and we will seek to globalize this learning by implementing it for new audiences and new giving contexts, such as content offers or direct appeals.