The inaugural Nonprofit Innovation & Optimization Award winners have been selected, representing leaders in nonprofit marketing and fundraising innovation from organizations of all sizes.

“We tried to select organizations that were solving marketing and fundraising problems in new and unique ways and seeing major results. But ultimately, what’s most important is that these organizations were learning about their donors along the way – not just blindly testing and hoping for the best,” said Tim Kachuriak, the Chief Innovation & Optimization Officer for NextAfter and founder of the NIO Summit.

One winner was selected for each of the six categories, with the exception of the Recurring Giving award in which two winners were awarded.

“Our office was in a deadlock on who to choose for the Recurring Giving award. Ultimately, we decided to award it to two organizations: one showing a great example of optimization on a small budget, and the other showing innovation at a major nonprofit with a lot of moving parts,” Kachuriak said. National Breast Cancer Foundation launched an Honoring Mothers campaign that expanded their organic reach by 177,000 during a season with historically low-engagement. View the full campaign details. 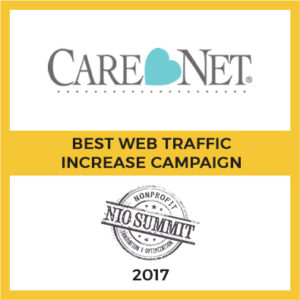 Care Net launched an integrated multi-channel effort to develop their inbound content marketing, leading to a 91% increase in web traffic and a 75% increase in lead conversion rate. View the full campaign details. 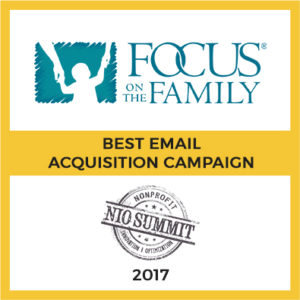 Email Acquisition – Focus on the Family Canuck Place built a giant blanket fort downtown Vancouver for their Best Day Ever campaign. This reoriented the public’s view of their work, helping surpass their online giving goal by 45%. View the full campaign details. 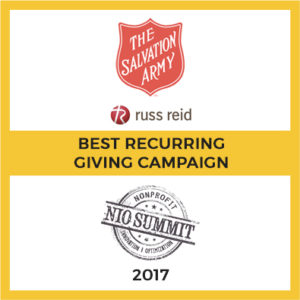 The Salvation Army, in partnership with Russ Reid, transitioned to a new recurring gift program. By focusing on a stronger value proposition, they generated a 140% increase in conversions. View the full campaign details. Forest Cliff camps, operating on a small budget and staff, developed a stocking stuffer campaign with an upsell donation ask resulting in an 883% ROI. View the full campaign details. Hillsdale College conducted a year-end fundraising experiment, proving that a simple nurturing post card can lift conversions by 204% ­– contributing to a 64% increase in year-end revenue. View the full campaign details.

The 2017 Nonprofit Innovation & Optimization Awards will be presented at the NIO Summit on September 22nd in Fort Worth, TX.