Forest Cliff Camps is a charitable camping organization based in Ontario, Canada. They host over 3400 children at summer camps and day camps every year. While most families will pay $200 to $600 to send their kids to camp, there are many that can’t afford this for their children. To help accommodate these families, Forest Cliff Camps has a scholarship program called the SummerFund that helps make camp possible for over 300 children.

In the past, these scholarships have been primarily funded through an Annual Banquet fundraising event. Through this event, Forest Cliff had acquired over 150 donors to help sponsor the scholarship program. But to reach 100% funding, they needed 150 more.

A large portion of Forest Cliff’s email file is made up of parents of current or former campers. These parents are ideal prospects to become donors since they have seen the positive impact that Forest Cliff Camps has had on their children first-hand.

The problem they faced with tapping into this segment of parents for fundraising was that their relationship with Forest Cliff had never been about giving. Tyler Shaule, the Executive Director at Forest Cliff Camps, had to figure out how to bridge the gap between these parents’ transactional view of Forest Cliff and the need for their generosity. Tyler came up with a plan to utilize the Christmas season as an opportunity to bridge this gap between a transaction and generosity. The plan was to reach out to these parents in a more transactional way they by offering them a “Stocking Stuffer Swag Bag” for their child for free. All they had to do was pay for shipping. It was Forest Cliff’s Christmas gift to the parents and their children.

After the parent had accepted this offer and entered their information to pay for the shipping cost, they were immediately presented with an opportunity to make a $53 donation to help another child attend camp. This donation represented one month of a child sponsorship.

If the parent said “Yes” to this one-time donation, they were then asked to make their gift a monthly recurring donation. This recurring $53 donation equaled a full child sponsorship and ensured a child would be able to attend camp the following summer.

In one day, they had sold all 50 stocking stuffer swag bags. This resulted in six immediate donations, and one new recurring donor. With a follow-up series of emails, they were able to get one more recurring donor. 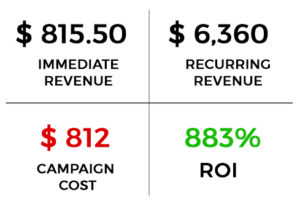 Now, the total number of donations here are small. But let’s look at the impact this had on revenue.

The campaign had a total cost of $812. This includes the cost of shipping and the bags themselves. They netted $815.50 in immediate revenue, which means that they broke even. But when you consider the average lifetime value of one of their recurring donors, there’s an additional $6360 in revenue for Forest Cliff Camps that they can use to send more children to camp and grow their impact. 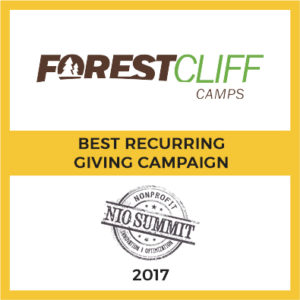 One of the primary reasons we selected this campaign for a 2017 Nonprofit Innovation & Optimization Award is the way in which Forest Cliff Camps went about executing this plan. Had they rolled this campaign out to their whole list of 15000 people, they would have been taking a large risk without any assurance the campaign would be successful.

What if people took the offer and didn’t donate? They would lose $14 per stocking stuffer bag, and that would have put them in a deficit. They took a strategic risk to test their idea, and now they have a strategy they can rely on and optimize for the future.