What You Can Learn About Recurring Giving Communications from 115 Nonprofits Finding new donors, particularly recurring new recurring donors can be tough. People don’t wake up the morning saying, “I’d sure like to give some money away” (well, not most people). And even fewer think, “I’d sure like to give money away each month.” So when you are successful in acquiring a recurring donor, you need to take care of them (after you high-five your co-workers and thank the crap out of the donor, of course).

This means communications and customer service!

Roger Craver, in his research for Retention Fundraising, figures that ‘fundraising’—the campaigns and appeals asking people for money—accounts for only about 20% of a donor’s lifetime value, with the vast majority of the value coming from communications and customer service.

And that’s why we didn’t just stop at the donation experience for this study but tracked all the communications we received—emails, mail, phone calls, and texts—and reported a card as lost and another as stolen. Here’s (some of) what we found.

1. Recurring giving communications don’t change too much between one-time, upgraded, and recurring donors.

Recurring donors give to organizations each and every month, often for multiple years. You would think that these high-value, committed, and engaged donors would get communicated to differently than those who give one-time gifts here and there and, most likely, not again in the future. But while we did see some differences, they were not as different as we thought.

38% of nonprofits make no change to email strategy for recurring donors, and 58% no change for direct mail. When you also consider that email was the only channel used by every organization and accounted for just about 80% of all the communications we received, the donor experience of a recurring donor compared to a one-time donor is even less drastic on a per-touch point basis.

But there were some differences. This makes sense as recurring donors are (most often) giving every month so the need to solicit should go down. And, related, the need to communicate, report, and update these donors (cultivation) should go up.

…but over time, thanking/receipting goes way down, cultivation dips, and solicitation goes up. 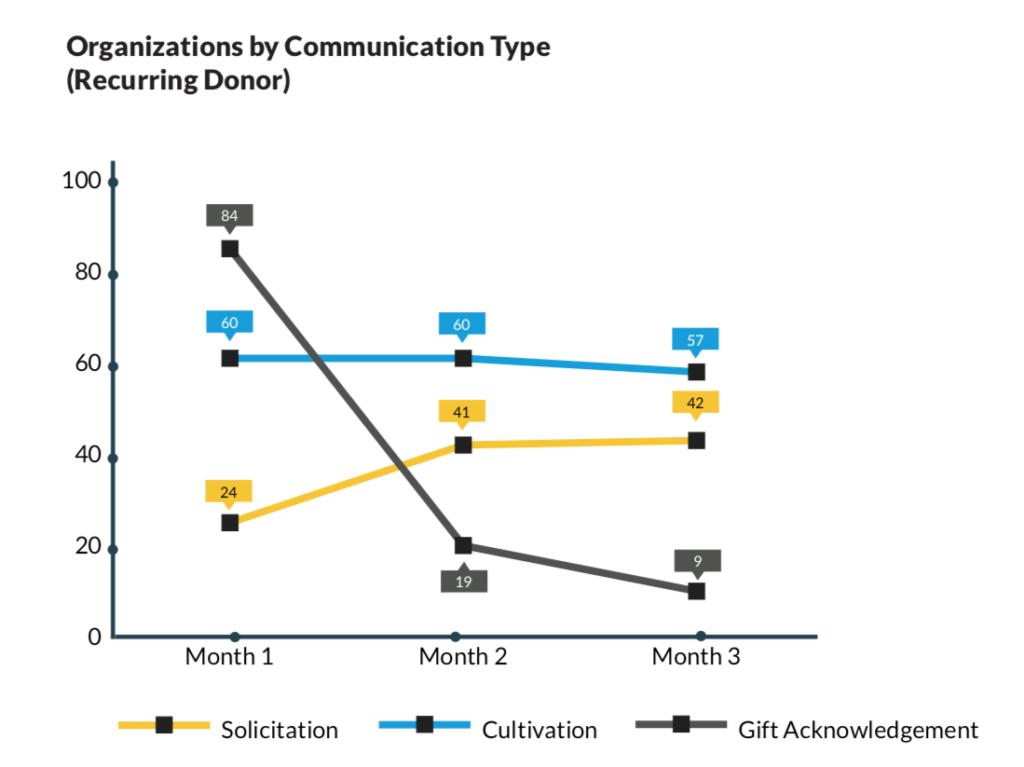 This hints at a change in how recurring donors get thanked and communicated with right after making their gift but even by month 3, they are ‘back to normal’ getting cultivated 23% more and solicited 11% less than one-time donors.

The lesson is: you should create a separate communications plan for recurring donors for a whole year, not just for the first 30 or 60 days.

2. Communications can be more personal and tailored to each donor

Just sending something out isn’t the goal of communications—although 9% of organizations sent out nothing so I guess there’s something to be said for sending anything. That said, it’s about engaging with a donor to both make them feel appreciated for the support they are giving and plant the seeds for how they could potentially support even more in the future. This can be by giving more, giving again, volunteering, or advocating on your behalf. But that’s not quite what we found and experienced.

59% of communications were cultivation focused… The fact that a majority of communications are focused on cultivation is good. It’s hard to say if a roughly 2:1 ratio of cultivation to solicitation is ‘good’ but that means every third touch point is a direct ask to give again.

Again, this hints that the thanking, stewardship, and communication plans for recurring donors are very short-term focused.

And 13% of organizations didn’t send any cultivation content to any of the donors.

This is obviously not good. To give and not have any other communication beyond a receipt and getting asked to give again—especially if you made a longer-term commitment like a recurring gift—is very poor.

When emails were sent, they were mostly from organizations and brands.

Just 1 in 5 organizations ever sent a message from an address representing a real person. This can lead to even the ‘warmer’ cultivation messages and asks for appeals coming across as more cold and impersonal.

Text and phone were underutilized. These more personal channels can be labor-intensive, but with the high value of recurring donors, we wondered if we’d see a marked increase for phone (calls and texts). We did not. This is also partly due to only 75% of organizations collecting the phone number in the donation process so even if some wanted to they simply did not have the information.

3. Customer service can be improved (and more personal too)

Much of the value of recurring giving programs is in their long-term, or lifetime, value. This relies on donors sticking around (and they often do). But, in addition to the communications, the transaction method and simply being able to process donations on a recurring basis poses some systematic and customer service challenges. And, based on our findings, there’s some definite room to improve in this area.

As I highlighted earlier, as time goes on the cultivation communication goes down and solicitation goes up but, surprisingly, very few organizations were still acknowledging a recurring donors gift in month 3.

Now, this could be due to saving paper, systems, and consolidating receipts, but I think that what it means in practice is that donors aren’t getting thanked and acknowledged for recurring donations every month.

Almost a quarter of lost cards (24%) and almost half of canceled cards (47%) received NO communication at all. Cards will get lost, stolen, and go expired. Don’t let your nonprofit miss out! Credit card changes are one of the biggest factors in losing recurring donors. So, one solution is to accept and encourage more EFT transfers—only 33% of organizations accepted it—or another is to use modern tools to help automatically update the cards—like 68% of organizations in the study did. Barring that, you’re on your own to reach out and contact donors and these rates show significant room for improvement to simply contact donors of lost and canceled credit cards.

When we were contacted by organizations about our credit cards, the majority of communications, and the vast majority for the canceled card were transactional or system-generated email.

Keep in mind the commitment and value of recurring donors here. IF you get contacted it’s cold and automated. Not great.

The communication strategy didn’t change that much from one-time to recurring donors even though their support (amount and frequency) are quite different and should be treated as such. The communication we did receive wasn’t very personal and there is plenty of room on the customer support side to improve and optimize to keep your (valuable) recurring donors around even longer.

That just scratches the surface of what’s in the report, so here are a few other findings may be of interest to you: 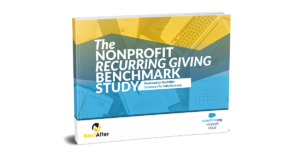 Get all the statistics and insights to improve your nonprofit fundraising with your free copy of The Nonprofit Recurring Giving Benchmark Study here.

This was originally published on the Salesforce.org blog and can be found here.