What Is the Best Time to Send Fundraising Emails?

The right message to the right person at the right time is an old marketing maxim. And while much has been done around email messaging as well as targeting and segmentation — although more can and should be done — there isn’t a lot out there about the best time to send fundraising emails.

And it’s a question we get asked all the time: what is the best time to send fundraising emails?

The answer: it depends.

Most best practice guides will say that you should send email early, 6 am to 9 am, or between 10 am and 1 pm. But if everyone sends at the “best time”, doesn’t that actually make it the worst time? Or at least the “not for sure the best time”?

Instead of just trusting ‘best practice’ and what others say, let’s look at some data (Note: Unless otherwise stated, all times are Central Standard Time).

What time are year-end emails sent?

Everyone sends email at the same time.

The crowded time has changed a bit over the years — it used to be a bit later in the day compared to now — but the pattern has always been a crowding effect around the same time of day. 50.9% of the emails we received at year-end were sent between 7 am and 1 pm — the ‘red zone’ in the chart above. This isn’t to say you should avoid those times per se but again, if everyone is sending emails at the same time maybe that’s not the best time for you and your donors.

What time are emails sent outside of year-end?

In the Spring of 2019, we partnered with Kindful to do a study on Nonprofit Email Cultivation and analyzed 2,589 emails from 199 nonprofits. For this study, we tagged each email as either a cultivation, solicitaition, or confirmation email to get even deeper insights on the email strategies of nonprofits.

When we looked at when the non-confirmation emails were sent — cultivation and solicitaition — here’s what we found:

You can see that ‘red zone’ cluster again fairly similar to the year-end one. In this case, 54.8% of the emails we received were sent between 6 am and 1 pm.

In 2018 we did a study looking at the online giving experience of 152 Canadian charities and since then we’ve been getting and tracking all of their emails. For a recent presentation — and just because I love making heatmaps — I wanted to see how Canadian organizations differed, if at all.

Again you can see that clustered ‘red-zone’ again and in this case, 54.6% of the emails we received from Canadian charities were sent between 6 am and 1 pm.

What time are fundraising emails sent?

Okay, so year-end, US nonprofits, and Canadian charities are all sending around the same time. But would a different type of email be sent at any different time? In short: no.

From the aforementioned State of Nonprofit Email Cultivation study with Kindful, when we just looked at solicitation emails, here’s what we found:

The short answer: at the same time.

The slightly longer answer: mostly between 6 am and 1 pm.

But when do your donors give?

Now you know when most other organizations are sending their emails you can look at testing different send times to stand out from the crowd. But what about your crowd? Well, if you have Google Analytics and eCommerce set up — which you really should — you can easily see when your donors are giving to get more insights to build your tests around timing from.

Here’s how you can create a donations by hour report using Custom Reports in Google Analytics: Then you’ll be able to see something like this: I find it easier to view and analyze in Excel so after a quick export you can get a chart that looks at transactions AND revenue like this: 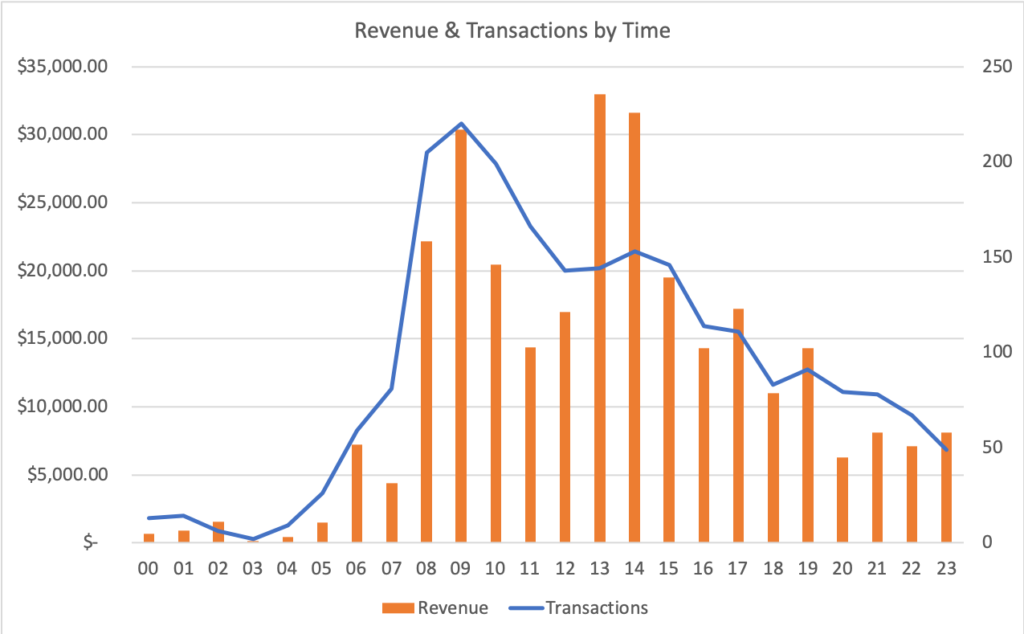 That’s because average gift spikes during this time: For this organization, their donors are most generous, on average, in that 1 pm to 3 pm period. So while only 33% of all transactions happen in the afternoon and early evening (1 pm to 7 pm) — compared to 41% of transactions in the morning and lunch (8 am to 1 pm)  — that afternoon and early evening period accounts for 43% of all revenue compared to 36% for that morning and lunch period.

Less volume but more revenue thanks to an average gift that is 126% higher in that afternoon and early evening period.

So maybe send fundraising emails in that afternoon and early evening period, yes? Well, hold on… transactions and average gift directly lead to revenue but another key metric for online giving is conversion rate. What can we learn from looking at it? Here you can see that the peak transaction time of 8 am to 10 am remains high but the conversion rate stays high throughout that early afternoon and early evening period.

So then, what is the best time to send fundraising emails?

For this organization and looking at their key metrics — transactions, average gift, conversion rate, and revenue — it seems that fundraising emails would perform best if sent in that 1 pm to 2 pm window. But that’s just for that organization.

Okay, enough already. Just tell me, what is the best time to send fundraising emails?!?!

What I will say is that, for fundraising emails, you should consider testing a bit later in the day — like right after lunch — as you’ll probably have a better chance of standing out from other organizations and there’s a good chance your donors are more likely to give — and give more — in that time.

But in the end it’s something you’ll have to find out for yourself. Good luck!